is the first album by Ra Djan. I have created the album in collaboration with Mishroom – Israel based producer and guitarist. I wrote most of the scores and sound production and arrangements we did together with Mishroom. He did the final mix and master as well.

The first album is electronic but it has a rock vibe because of lots of live instruments, rock attitude to arrangements and mixing.

I have started experimenting with electronic music in 2006 and it took me long 7 years to accomplish the first full-length canvas. A university and a long journey around the globe were the barriers on road of sonic creation and production. A single acoustic guitar in the middle of the forest, in urban anarchist squat or somewhere in the mountains is obviously not enough to record a tune.

Opening track “Cube” is a reminiscence of two favorite music acts – Pink Floyd and Jean Michel Jarre. A gilmourish guitar and Jarre’s atmospheric keys. That is the only space ambient track I have ever wrote. Actually, my brother Drew created the initial tune and atmosphere of the track. Respect to him!

is a powerful track with mighty beats, ethnic melodies and Tibetan throat singing that I have learned during my stay in Altai Mountains in Russia and Himalaya Mountains in India, Himachal Pradesh. Again, my brother wrote the main ethnic riff of the track – the initial idea of the track belong to him. The main influence of Maytreya is Prodigy. Albeit Prodigy are far away from ethnic tunes and they don’t have bigbeat & downtempo tracks in 103 bpm.

is a first track that I have recorded in my life. At the beginning, the track had no guitars – I used marimbas and kalimbas to play the main melody. Those ethnic instruments remain in the final version even though they have no leading role. I have added guitars for I wanted to make a real space rock surf! I have never heard of the modern revival of the original 60’s surf and moreover — a surf with electronic elements that are able to create space landscapes. Mishroom wrote the bass guitar score and arranged bridge parts.

Anima Fuga is a title track and the longest on the album. Epic tune with four different parts in different keys. The first part of the track is as the previous one – an ode to space surfing while the other parts transform into the ethnic jaw-harp trance.

I am the master of that ancient ethnic and, at the same time, international instrument. I have a collection of approximately 70 pieces of different kind from different regions of the world. The jaw harp has a constant pitch but one can hear overtones of the natural scale. I have arranged jaw harps in such a way that four of them in different pitch are playing at the same time thus forming a chord, then in turn of the next chord I switch instrument using a special holder. Four players needed to play that orchestra score live but I manage to do it alone with a looper on the background.

There are no direct influences on that track and I even cannot think of anything that can be responsible of indirect impact.

is a fifth track on the album and it is a pure cyber shaman piece. Mesmerizing oriental rhythms with ethnic melodies, space guitar solo, whirling synthesizers and Tuvan throat singing – kargyraa. The track opens with the swamp sounds that I created using vocoder and two Hungarian jaw harps by Szilagyi – they call them Doromb.

Ra Maayan is an initiation song with genesis, evolution, death or rejection of the old skin and rebirth. That is a reconstruction of the shaman journey to the otherworld, a rough connection with transcendent spirits. Each travel is some kind of initiation of the hero: death in a former state and regeneration in a new one. Human life is divided into a set of stages – each one with the beginning and the end. Transitions between stages are various – from sharp and radical to smooth and imperceptible.

In “Youth without youth” – a short story by Romanian historian of religion Mircea Eliade — I read of a person who periodically entered the state of uncontrolled trance and starts talking in ancient languages: Babylonian, Akkadian, proto-Elamite. With every new session, the chosen language becomes older than the previous one with the total horrible tendency to convert into subhuman gurgling.

That small fragment had a big impact on me as a musician interested in ancient musilanguage and as a cultural historian — in prehistoric evolution. Extremely thrilling to “touch” the half-forgotten life of an ancient man, to understand his way of thinking, everyday life, the sound of his speech and first musical experiences. Actually, singing language precedes speech as the theory of musilanguage put it.

In “Ra Maayan” I wanted to reproduce that dusty, scratched on the walls of the caves language. As a result, I have created a stylized energetic dance without semantics, a pure emotional impulse. A musilanguage became one of the musical instruments, was woven into music while remaining a pure energetic form without meaning – a cyber-shamanic imitation of prehistoric rituals.

Thanks for all your support, friends!
To all the great people, who helped me with crowdfunding campaign!
«Ishtar» is dedicated to my beloved wife Sveta Shelest!

is my second album and it explores much darker realms of psychedelic broken beat music. It is a result of a 5-year long path with many obstacles on the road, lack of time and many tracks left outside and unfinished. It is different from my first album for I continue to experiment and expand my creativeness and knowledge. I started digging the path, which I previously outlined by tracks like “Maytreya” and “Ra Maayan”.

Opening track “Alyan Vaala” is a recreation of a tribal circle dance, which evolves into a massive and ecstatic leap into cosmos. To forget about the boundaries of the body, lose ones ego and unite as a one mighty organism called Tribe a group of collectives has to

is a unique drum and bass track based mainly on a jaw harp sounds and derivative effects. For that 10-minute epic, I have recorded over one hour of different jaw harps from my big collection. Most of the effects I did by routing my recordings through many effects with a complex automation. Instruments play simultaneously and form chords so that four musicians needed to play it live.

Playing faster than 165 bpm in useless on a jaw harp – impossible to keep up with the tempo while preserving articulation. To say nothing about the fragility of the instrument. That is why I did not want to speed up the track to fit the most common tempo of the genre.

is pure madness – a cover version of the best tribal metal song ever by Brazilian cult band Sepultura. That is not a remix, but an original cover version of the song in break beat style. The song features the Mike Sandman on second vocals and Pavel Booblik on some percussion. I have recreated a song with tons of ethnic percussions like asalato (kashaka), bamboo, jaw harps (doromb), darbookas and tambourine played by Booblik etc.

Ratamahatta is a question and answer type of the track – I sing the first verse and Mike Sandman repeats the later. The lyrics are about drugs, favelas, cheap horror and – as I can imagine it – a massive carnival party with the whole town involved.

When I speak of carnival, I do not mean a famous annual theatrical entertainment in Rio. In contrast to the official holiday, the grassroots form of carnival is a temporary exemption from the prevailing truth and the existing sociopolitical system, the temporary abolition of all hierarchical relations, privileges, norms and prohibitions. I think of festivity — a form of the second life of the people, who temporarily entered the utopian kingdom of universality, freedom, equality and abundance. Such a life was not played as if an actor plays his role, but lived during the time of a carnival.

is a track that I call progressive breakbeat – starts with the 9/8 odd beat, evolves into cyber metal madness, leaps into rock and roll and finally lands in the land of unstoppable bong smoking. The track is a depiction of marijuana bad trip – uneven heartbeat and intoxication.

9/8 is an original Turkish beat – you will not find it in any other musical culture. I bumped into that strange measure when I started to play Baglama or Saz – Middle Eastern string instrument with a magic sound.

When I composed “Tarantul” – the 5th track of the album – I thought of cybernetic version of a traditional medieval Italian dance Tarantella is famous for its jolly and fast upbeat tempo with drums and tambourines. And it a dancing mania which was popularly believed to result from the bite of the wolf spider Lycosa tarantula. A dancing mania is also known by the name of tarantism.

Some claim that that tarantism was a mass hysteria, others claim that it originated from bacchanalian rites of Roman Empire or even from the Greek myth. They were both but not at the same time! I adore crude, sexual and exuberant ritual of Bacchus and Dionysus – gods of wine and religious ecstasy! Take that dance macabre and put into futuristic space – that is the message “Tarantul” conveys!

“Ishtar” is title track. The song illustrates apocalyptic landscapes of the abandoned terrain and transform into the prayer to the goddess Ishtar in Akkadian language. I took the text from the Ammi-Ditana’s Hymn to Ishtar who was a king of Babylon in 1683–1640s BC. Linguists from universities all over the world reconstructed the sound of the ancient language and I borrowed the text to create a song.

I dedicate the song «Ishtar» to my beloved wife and talented artist Shelest Sveta.

In honor of Leo Tolstoy and autocephaly of Jerusalem church!

Mixed and mastered by 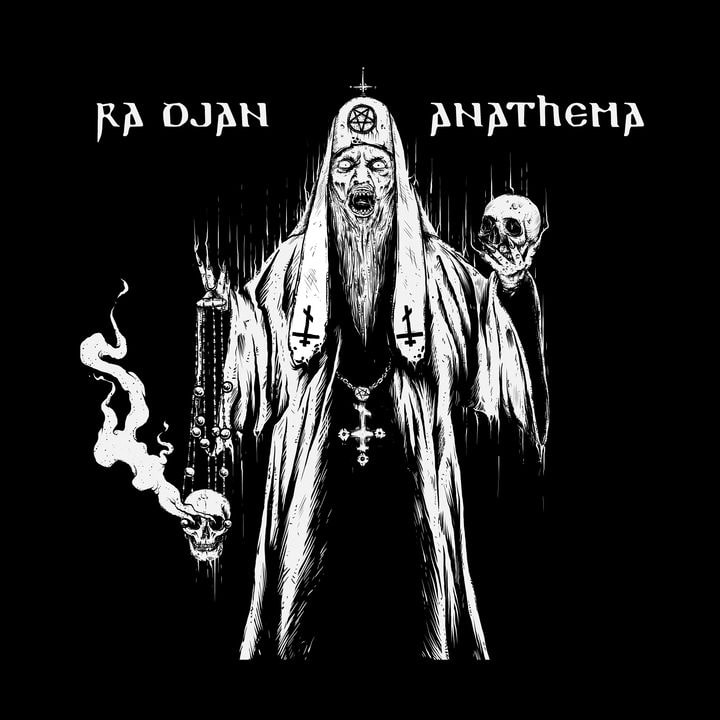